What a coincidence, a short time later I found a used vehicle on the side of Gazelle and only built up on a manually operated jeep. Soon I was in contact with the salesman in the Savoy and the questions became more and more concrete. Our contact also included importing into Switzerland and how we could do this successfully. Soon I showed Chantal the first photos with the question whether she could imagine a journey with such a vehicle. 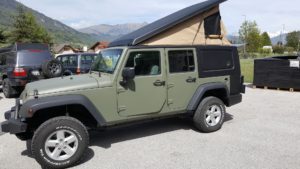 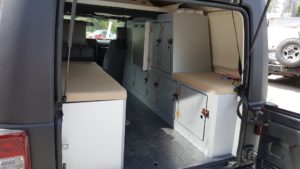 My 57th birthday was already over, where I raised the question of early retirement and our “journey around the world” slowly began to germinate, we traveled to Vougy in “Haute Savoie”.

After about 2 hours we signed the contract of sale with Philippe Maître from Randoespace. Actually Philippe Maître did not want to sell the Jeep with the Gazell body at all, but only wanted to test in the second-hand market whether such a vehicle is marketable. It is a slightly older jeep with a new body for exhibitions. Philippe Maître also referred us directly to his partners of Off Road Accessoires in Geneva, who will take over the import into Switzerland for us and carry out further wishes on our part.

Anyway, we – Chantal and I – gave each other a camper of the special kind for our 30th wedding anniversary. Whether it was finally a good decision, or “love at first sight”, we did not really know on our way home.

Soon, however, a small odyssey began around the import, so that the delivery was delayed by more than one month. The obligatory changes and our wishes were quickly completed, but the missing chassis number presented the authorities with almost unsolvable problems. In the middle of July we finally received our new vehicle and spent the first nights in it.

The idea of the round-the-world trip became more and more concrete; in addition to the further travel preparations, the first ideas for changes on the part of the vehicle also sprouted.