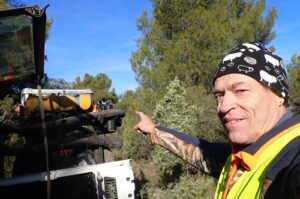 After Iceland it was clear to both of us; we also need a heated home in colder temperatures. But our limited space doesn’t allow us too much luxury and we can’t leave any items at home. Everything has been perfected and optimised; we really only have the bare essentials with us. With our space constraints, we also had to think about fire safety and it soon became clear that the heating system could not be installed in the vehicle without sacrificing storage space. So we looked for possibilities to somehow mount the desired heater outside the vehicle.

At the Bavarian company Nakatanenga we found the desired product and the corresponding accessories for the installation.

The heater is neatly stowed away in an aluminium box with its diesel tank and the necessary control parts. The heat is conducted to the desired location via a heating hose. Thanks to this concept, we only had to install the best possible air distribution in our camping compartment; the rest remains outside. Thus, the additional spatial restrictions were bearable.

We strapped the aluminium box with the heater to the rear rack above the spare wheel and fed the warm air into the side of our camper via a hose. The rear door of our jeep is not affected by the heater and the hoses when opening or closing.
If necessary, we can take the heater off the rack and heat a tent as well as the car.

Conclusion after the first few days in low temperatures: We would never give this heater away again; the homely warmth is unbeatable even in icy conditions! And the absolute highlight of the new heater: we can control it remotely from our bed and slip out of our feathers with the camp compartment preheated.
Wow; if we had known this earlier!

The only downer is that our extra battery was not designed for this new use and is at the lower limit of its available power after a few hours of heating. The bridging with the vehicle battery (main battery) provides a remedy, but we should not overstrain this either, as we want to start our Jeep at any time. 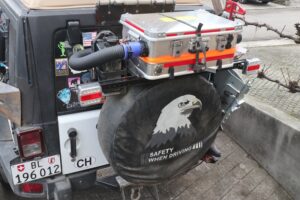 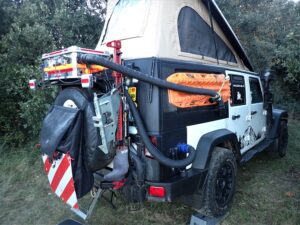 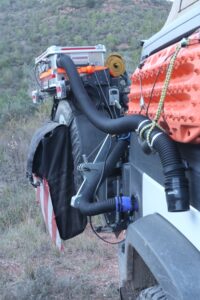 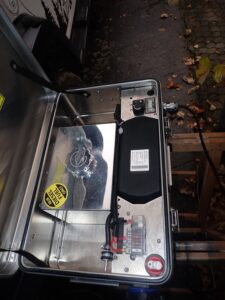 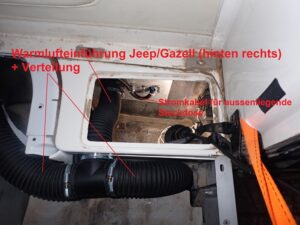 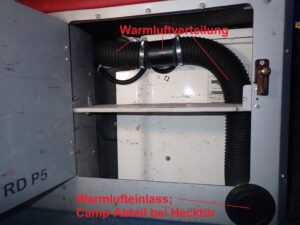 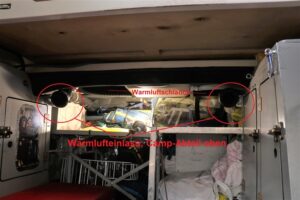 20 novembre 2021; Water ingress Jeep
Probably when changing the Gazell camping cabin from the old to the new Jeep the rubber seal was damaged and now somehow the water runs inside through the seal and drips into the interior of the Jeep on both sides of the driver’s and passenger’s door. The standing water in the floor pan would not be a problem as a Jeep has special openings in the pan, but the dripping water while driving is “annoying”.

The defective door seals have already been changed for a lot of money (original Mopar part), but did not bring the desired success. It still drips during heavy rainfall!
The upper frame seal is currently neither available as an original accessory nor from a aftermarket supplier.

In addition to taping off the upper window frame seal, i.e. between the frame of the windscreen and the roof of the Gazell camping cabin, I created additional openings on both sides of the Gazell roof gutter at the front and a corresponding tear-off edge so that the water should no longer run into the door seal; with moderate success. 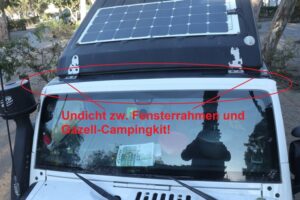 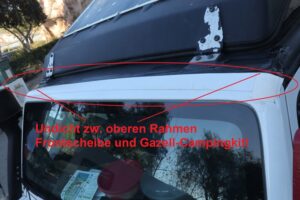 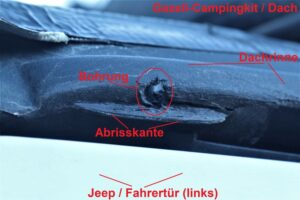 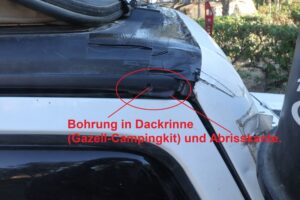 17 November 2021; Repair and service / poor Jeep customer service
Due to the repair of the axle journal bearings in Reykjavík/Iceland, the two shaft sealing rings of the front axle were damaged and the differential gear was therefore no longer completely tight (oil loss on both sides).

The “second repair”, i.e. the replacement of the damaged shaft sealing rings, was done by our trusted workshop in Basel. In addition, scratched areas were discovered on the axle, where the oil seals are located. The incorrectly tightened screws on the steering mechanism and damaged screw heads said a lot about the quality of work in Iceland!

At the same time as the repair, we had a service carried out on the engine and all the gearboxes, so that we can experience the next x-thousand kilometres in Spain and Portugal carefree and without any workshop visits.

Unfortunately, the mileage did not quite reach the next major service, which would still be included in our service package. However, since the vehicle’s computer prescribes the oil change depending on the use and driving style, the indicator light in the cockpit would have lit up soon – one way or another – and directed us to a workshop.

In addition, on the advice of our workshop, we had the automatic gearbox serviced, i.e. an oil change including flushing and replacement of all filters and seals. As we often drive our vehicle in difficult terrain, even Jeep recommends this service, whereby the work is carried out by an external and specialised workshop.

For the lack of repair in Iceland, we already contacted the Jeep customer service in Switzerland there, as we were already on our way back. To our astonishment, they responded positively to our request and offered appropriate help and goodwill. When the repair was carried out in Switzerland, there was suddenly no longer any sign of generosity and the costs were fully borne by us. We immediately asked ourselves why we went back to Reykjavík to have the work done in an official Jeep workshop when the customer bears the risk himself anyway?

The next bitter pill to swallow was the 96’000 km service: this was not covered either, although a service package was included in the purchase. On our onward journey to Spain/Portugal, we did not want to drive to a garage after only a few kilometres and have the engine serviced. After our journey across Iceland, the vehicle computer would have directed us to a workshop soon and the service package is only valid in Switzerland.

Since the required kilometres had not yet been reached and the service indicator light in the cockpit was not activated, we had to pay the full costs.
The advertising promises a lot and during the sales pitches everything is backed up even more. Unfortunately, the small print is not referred to and with our heavily modified Jeep, the customer bears the full risk anyway. So that’ s it!

Yes, we are disappointed with the Jeep service in Europe! Maybe there is too much Fiat behind it! A lot is promised, but suddenly the small details count and; “the last one bites the dog” – the customer is always asked to pay!

Too bad for the great vehicle!

PS: The statement about Jeep customer service refers to “Jeep Switzerland” and not to the workshop in Basel, which does impeccable work and has our full trust. This workshop is also at the very end of the chain and is only allowed to take the “beating” from the customers.

September 8, 2021 / Front axle right, axle ball joints failed / Iceland, on the south coast.
When changing the wheels – in an off-road vehicle you change the wheels at regular intervals – I noticed a lot of axle ball joints play on the right front.
Whether the worn out joint was caused by the many tracks in Iceland and whether the original material of our Jeep is not as good as the manufacturer claims, we would like to leave up in the air. However, the fact that we have often pointed out a cracking noise in the steering to different authorised workshops within the warranty period; these are facts, but we were always told that there were no problems at all with the front axle and that a certain amount of play was absolutely normal. 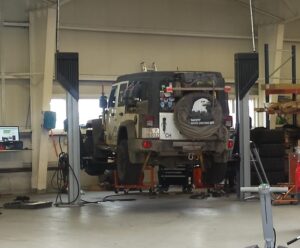 Back in Iceland: A little uneasy, we returned to Reykjavík and visited a Jeep authorised workshop (Ísband) there. Our Jeep was immediately examined and the diagnosis was clear: worn axle ball joint, top right!
The workshop also understood with our special situation and that we live in this vehicle.  They facilitated a repair the following day (9.9.21) and to our amazement, the necessary spare part was in stock.

In 5 hours the job was done, i.e. greasable ball joints were fitted on both sides and the worn front brake pads were also replaced. (…there was not enough time for the rear pads, although they are more worn! What a workshop!)

After transferring about sFr. 1’500.- for the diagnosis, work and material, we could continue our journey in Iceland.
But – oh horror – after a later vehicle check I discovered oil leaking from the front axles! One problem (axle ball joints) was solved, two new problems were created; little oil dripped from the axles on both sides. Presumably, the shaft seals inside the axle were damaged during the repair in Reykjavík when the shafts were pushed in.
(The design of the much-praised Dana axle probably still corresponds to the same type of the original Jeep, which simply had to work and was a throwaway product in the chaos of war anyway). 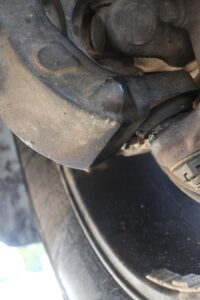 Since a return trip to Reykjavík was no longer possible, we had to regularly top up the oil in the front cardan housing and hope that the oil smears do not cause too many environmental problems.
Let’s hope that our workshop in Switzerland will do a better job with the follow-up repair.

14. August 2021 / weld seam on exhaust pipe torn / Iceland, track northeast of Laugafell
After a water crossing, there was suddenly a strange rattling under the right side of the vehicle. Only after a second thorough inspection of the underside of the vehicle did we notice the complete crack of the weld seam after the diesel particulate filter (DPF). 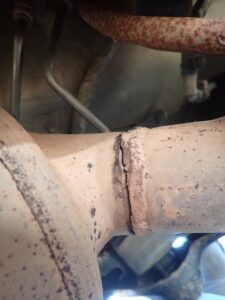 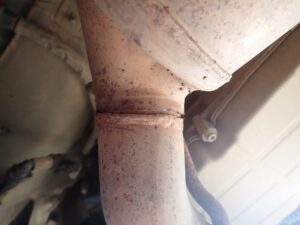 When, how and where we could weld this stainless steel pipe back together was rather a minor problem out in the sticks. Somehow we had to put the pipe parts back together to avoid further damage. 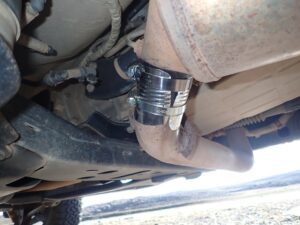 With “ResQ-Tape”, an old tin can and two pipe clamps we could eliminate the ” rattling”. The whole makeshift connection survived all further kilometres of the slope, so that we refrained from going to a welding shop for the time being. (…. presumably the corresponding explanations in Icelandic would also be correspondingly difficult to put everything back together as we wished! 😉 )